The Pufpaff Triplets from Cleveland, MN 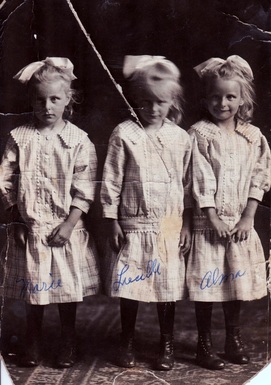 Click Here for Photos of the Pufpaff Triplets
Alma, Marie, and Lucille, triplets were born in MN, on a farm by Lake Jefferson in Cleveland, Le Sueur, MN to George and Bertha (Boldt) Pufpaff on April 29 1913.

They were local celebrities from birth, but were not nationally and internationally known until their triple wedding ceremony performed at the Church of Nativity on April 12 1932 in Cleveland, MN.  The entire town of Cleveland attended the wedding.  According to one article "they had to open the windows of the church so the guests outside could hear the ceremony."  One can only assume an open invitation to a local celebrities wedding during the depression would draw quite a crowd!  They were featured in the Guinness Book of World Records in the 1983-1990 for unusual golden anniversaries (the triplets were all married over 50 yrs), and even featured in the textbook "Married and the Single Life", by Audrey Palm Riker, Holly Brisbane, 3rd edition 1984.

My Grandmother was Marie (Pufpaff) McNamara.  I grew up hearing about stories of their wedding and seeing the occasional local article written about the triplets or even seeing a camera crew in my Grandmother's living room (I have some videos l'm working on publishing of this).  So, I know that they were considered celebrities in their day.  Obviously they didn't have fertility treatments back then so triplets were more rare then today.  I can only assume they received more attention in those days then triplets today would.

I have been scanning in my grandmother's albums, and may have only started to touch on all  the documents on the triplets.  I can only guess that there were hundreds of articles written about them throughout their lifetimes, locally, nationally, and internationally.
If you have any questions or would like to swap family info feel free to contact me at urbanhomestead31(at)gmail.com